Teratozoospermia, also called teratospermia, means low sperm morphology. Specifically when less than 4% of sperm in a semen sample is identified as morphologically normal.

This means more than 96% of sperm in males diagnosed with teratozoospermia has abnormal morphology (defects in the head, middle piece of tail of the sperm cell). These defects hinder the sperm from fertilizing the eggs and is one of the main causes of male infertility.

Teratozoospermia can be categorised into 2 types:

Examples of monomorphic teratozoospermia are globozoospermia and macrocephalic sperm head syndrome, also called macrozoospermia. However both these conditions are very rare and believed to affect less than 1% of infertile men.

Globozoospermia is characterised by round-headed spermatozoa with an absent acrosome, an aberrant nuclear membrane and midpiece defects.

Macrocephalic sperm head syndrome is defined as the presence of a very high percentage of spermatozoa with enlarged heads and multiple flagella.

Overall teratozoospermia is a serious condition which affects a males ability to conceive naturally. In fact, on average, only 1 in 20 males with teratozoospermia will get their partner pregnant within 12 months, according to the WHO reference values for human semen.

By the same reference, high numbers of sperm with abnormal morphology is actually quite normal among the male population.

However, the majority of these males will manage to successfully get their partner pregnant within 12 months.

These statistics highlight the limitations ‘normal sperm morphology’ has on the likelihood of pregnancy among couples trying to conceive naturally.

For males diagnosed with teratozoospermia, this usually means there is likely to be other factors hindering ones fertility.

The symptoms of low sperm morphology are similar to men diagnosed with oligospermia or asthenospermia. The primary symptom is the inability to conceive a child despite 1 year of frequent and unprotected intercourse.

Other related symptoms may include:

For males, the European Academy of Andrology recommends the following tests to be performed initially:

Semen samples can be collected in the clinic or at home following 2 to 7 days of sexual abstinence.

However, if collected at home, the sample should be kept at room temperature and delivered to the laboratory immediately.

The following table outlines the lower reference limits published by the WHO for semen analyses. Any value below these lower limits is considered abnormal.
Source: Cooper T G, et al. (2009)

Teratozoospermia is diagnosed when there is less than 4% morphologically normal sperm, and all other parameters are normal.

During assessment, the 3 main parts of human sperm (head, neck, tail) are carefully observed under a microscope with the help of hematoxylin and eosin staining.

A normal head should be:

The area between the head and the tail, which is slightly wider than the base of the tail and about the same length as the sperm head. It contains the mitochondria, which generates the ATP required for the sperm’s movement.

The tail is approximately 10 times the head length and is made up of the same structural molecules involved in spermatogenesis (during mitosis and meiosis). Therefore, an abnormal tail can occur from the incorrect distribution of chromosomes.

At least 200 sperm cells are evaluated during this assessment, to minimise any sampling errors, and a percentage of normal sperm cells calculated.

The sample is considered to be morphologically normal if at least 4% of sperm do not show any visual defects.

Based on initial results, your Doctor might recommend additional tests to determine or rule out potential causes of teratozoospermia.

These additional tests may include:

Men suffering from abnormal sperm parameters are susceptible to further issues such as:

Several studies to date have found an association between abnormal semen analysis, including poor morphology, and a higher risk of cancer. Although the exact reason for this link has yet to be identified infertile men should consult their Doctor to discuss long-term monitoring strategies.

This means for the majority of males, diagnosed with teratozoospermia, sperm quality should improve after intervention.

In a systematic review containing 19,967 males, normal consumption of caffeine has no significant effect on sperm morphology.

Once a diagnosis has been made, your Doctor will recommend one (or a combination) of the following treatment options for teratozoospermia: 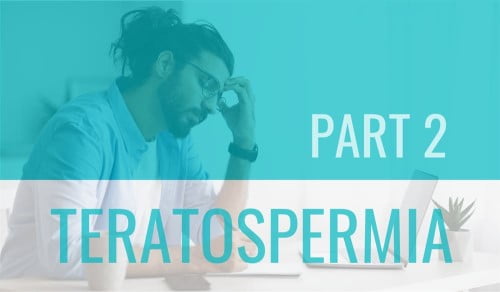 Treating teratozoospermia is a step-by-step process. Once a diagnosis has been made, your Doctor will recommend one of the following…. Read more