Asthenozoospermia is defined as reduced or absent sperm motility (< 32%) in fresh ejaculate. It is one of the main causes of infertility in men and can occur in isolation or, like in the majority of cases, in conjunction with oligozoospermia (low sperm concentration) and teratozoospermia (abnormal morphology of the sperm cells).

Biologically asthenozoopsermia is associated with structural defects of the sperm tail (flagellum). The sperm tail is composed of a core axoneme (axial filament) and near axoneme structures surrounded by mitochondrial and fibrous sheaths.

Interestingly the sperm core ‘axoneme’ and ‘cilia’ of other cell types within the body, share similarities in their ultrastructure, that cases of asthenozoopsermia can occur in males diagnosed with primary ciliary dyskinesia or Kartagener’s syndrome.

Fortunately, the majority of asthenozoospermia cases is due to common causes of infertility and is clearly visible during semen analysis with absent, short, angulated or irregular tails on spermatozoa.

In males diagnosed with asthenozoospermia, and trying to conceive naturally, female partner progesterone levels can also be a deciding factor.

The symptoms of low sperm motility are similar to men diagnosed with oligospermia or azoospermia. The primary symptom is the inability to conceive a child despite 1 year of frequent and unprotected intercourse.

Other symptoms may include:

Men suffering from abnormal sperm parameters are susceptible to further issues such as:

Several studies to date have found an association between abnormal semen analysis, including poor motility, and a higher risk of cancer. Although, no cause-and-effect relationship was directly established, infertile men should consult their Doctor to discuss long-term monitoring strategies.

The causes of low sperm motility fall into 3 main categories:

For males partners at this initial consultation, the European Academy of Andrology recommends Doctors perform the following:

Semen samples can be collected in the clinic or at home following 2 to 7 days of sexual abstinence. However, if collected at home, the sample should be kept at room temperature and be delivered to the laboratory immediately.

Sperm motility refers to a percentage of sperm with defined motion and is best assessed within 30 minutes of semen liquefaction.

The following table outlines the lower reference limits published by the WHO for semen analysis. Any value below these lower limits is considered abnormal.

Although a second test 3 months later is necessary to confirm asthenospermia. In fact, males with borderline results should request a third semen analyses to potentially avoid unnecessary treatment.

Of the two parameters, progressive motility is reported to be crucial for male fertility, since sperm need to swim against the flow of secretions within the fallopian tubes to reach the oocyte (unfertilised egg).

For this reason, some diagnoses of asthenospermia nowadays will also include the grade (i.e., A, B, C or D) which is evaluated according to the type of sperm motility.

Using this grading system, semen samples classified as asthenospermia will sometimes be considered ‘normal’ if at least 50% of the spermatozoa are of grade A and B. Conversely, if more than 50% of sperm are immotile, semen samples must be checked for viability to exclude a rare condition known as Necrozoospermia.

It is also very important that spontaneous asthenospermia, which can be caused by exposure of sperm cells to rubber (condoms), spermicides, extreme temperatures or long delays between collection and examination, is excluded during diagnosis before confirming Asthenospermia.

A repeat semen analysis 3 months later is useful for this purpose.

After semen analyses, the Doctor may recommend further tests to determine or rule out potential causes of Asthenospermia.

Overall, sperm motility is a good predictor for successful fertilisation and should be considered when making decisions regarding treatment options.

IS IT POSSIBLE TO GET PREGNANT WITH ASTHENOZOOSPERMIA

Males with asthenozoospermia can still get their partner pregnant, however the actual chance of pregnancy per cycle varies according to other sperm parameters such as DNA fragmentation and lipid peroxidation which is not assessed during the initial diagnosis of asthenozoospermia.

Once a diagnosis has been made, your Doctor will recommend one (or a combination) of the following treatment options for asthenozoospermia:

CAN ASTHENOZOOSPERMIA BE CURED

Fortunately, this does not mean your ability to successfully fertilize the embryo is nill, however the odds of successful fertilization, clinical pregnancy and live birth is significantly reduced.

A tailored fertility plan by your Doctor will minimize the time to conception. 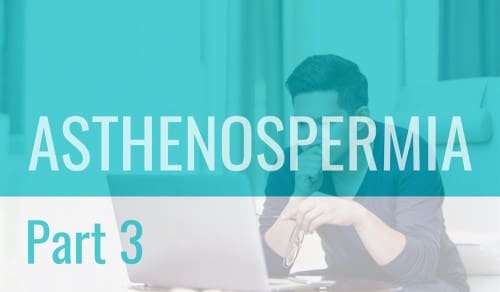